Colorectal cancer is the second leading cause of deaths in the United States behind long cancer, which has about three times as many deaths and just ahead of breast cancer, yet, colon cancer gets far less attention than either lung cancer and breast cancer  in the media.  So what are the most common colorectal symptoms in men to look for to help you beat this disease?      When caught early, most patients are likely to make a full recovery.   The Centers for Disease Control (CDC) estimates that in 2010 (the most recent year numbers are available), 67,700 men and 63,907 women in the United States were diagnosed with colon cancer, and 52,045 people in the United States died from colorectal cancer.  Slightly more men than women  (27,073 men vs. 24,972 women succomed to colorectal cancer.  Most researchers believe this is due to women being more proactive in having colonoscopies and addressing symptoms in the early stages as compared to men.

What is Colon (Colorectal) Cancer? 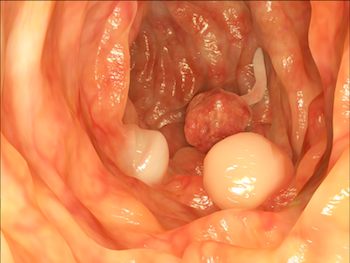 Colon cancer, also known as colorectal cancer, is a cancer of the tissue and lining of the colon or rectum.  Colon cancer develops from benign polyps in the lining of the colon that become cancerous.  Rectal cancer is cancer that effects the last several inches of the large intestine, called the rectum, from the Latin rectum intestinum, meaning straight intestine.  While they are actually two separate cancers, when both tissues are affected, it is referred to a colorectal cancer.

Approximately 112,000 people are diagnosed with colon cancer each year in the US.  Colon cancer in men  or women forms from benign polyps (growths) that form in the lining of the colon, become cancerous and can spread to other organs of the body.  Polyps are detected during a colonoscopy, and removed whether they are cancerous or benign (pre-cancerous), to prevent the formation or growth of colon cancer.

See also  Why Sex is Good for Prostate Health

At some point during its uncontrolled growth, a non-cancerous polyp can become cancerous, and begin to spread rapidly inside the colon or rectum, and eventually to other organs of the body.  Pre-cancerous polyps should always be removed to prevent the possibility of developing into colon cancer.

The early stages of colon cancer generally have no symptoms.  When Colorectal cancer symptoms appear, such as blood in the stool, changes in the shape, color or odor of fecal matter, and this is usually when the cancer has moved to an advanced stage and is harder to treat, which is why even healthy men and women should have a colonoscopy.

Stages of Colorectal Cancer are:

The Most Common Colorectal Cancer Cancer include:

See also  Diabetes Loophole Review - Is It Legit or a Scam?

When Should Men and Women Begin Having a Colonoscopy?

At what point should a man or woman have a colon cancer screening partially depends on your age, family history and race. The American Cancer Society recommends men and women who have an average risk of colon cancer should begin having a colorectal exam at age 50, and have a colonoscopy every 10 years or a sigmoidoscopy every 5 years.  Younger adults can develop colorectal cancer, but the chances increase significantly after age 50.  About 9 out of 10 people diagnosed with colon cancer are 50 years old or older.

“Average risk” is defined as a person who is in general good health with no other major health issues, does not have a family history of colon cancer or other cancers, and is not a member of an ethnic group considered to be at higher risk for colon cancer.

The two highest risk groups for developing colon cancer are:  African Americans, which have the highest colorectal cancer incidence and mortality rates of all racial groups in the United States, and Jews of Eastern European descent (Ashkenazi Jews) have one of the highest coon cancer risks of any ethnic group in the world.   Researchers have identified several gene mutations leading to an increased risk of colorectal cancer in this group.  The most common of these DNA changes, called the I1307K APC mutation , is present in about 6% of American Jews.  Other high risk factors that can contribute to the development of colorectal cancer include  a personal history of one of the inflammatory bowel diseases, such as Crohn’s or Ulcerative colitis, or an immediate family member (parent, sibling) with colon cancer or polyps.   A person who is identified as a “high risk” needs to be screened 10 years earlier than when their relative was diagnosed with colon cancer.  For example, if your relative was diagnosed with colon cancer at age 50, you should start colon cancer screening at age 40.