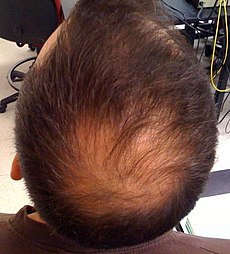 Androgenetic Alopecia, otherwise known as Male Pattern Baldness accounts for 95% of male hair loss cases. By the age of 35, two thirds of American men will suffer some degree of hair loss.  25% will begin to lose their hair by the age of 25.  Hair loss in men can have a devastating effect on a man’s self confidence, and consequently his life.  But, why and how does male pattern baldness occur? What are the myths and facts surrounding it? And what can you do if you begin to notice you’re losing your hair?  Help is at hand, read on.

Why Does Male Pattern Baldness Occur?

Male pattern baldness is caused by a sensitivity in the hair follicles to a male sex hormone known as DHT (dihydrotestosterone). The hormone ‘miniaturizes’ the hair follicles over time, causing the individual hairs to become finer, until the hair growth cycle for that follicle stops altogether.

Only men with a genetic predisposion to hair loss will be sensitive to this hormone.  What determines the onset, timescale, extent, and pattern of the baldness.  Doctors believe it is all down to an individual’s genetic make up.

Myth: The hair loss gene is on your mother’s side

Many men look to their maternal grandfather to see if they’re likely to experience hair loss in later life. Whilst the primary baldness gene is found in the X chromosome, thinning hair in men can be inherited from either parent. If both of your grandfather’s have maintained a full head of hair, then there’s a good chance you will too. This isn’t a definitive answer however, as the baldness gene can skip generations.

See also  Type 2 Diabetes and Oral Health - What is the Impact?

Myth: Wearing hats can cause baldness

Wearing hats can’t cause baldness or thinning hair in men.  However, a type of hair loss called traction alopecia can occur when prolonged tension is applied to the hair. This usually affects women who wear their hair in excessively tight braids, or those who wear tight/incorrectly attached hair extensions. Wearing a hat that fits comfortably can not cause this type of hair loss, or male pattern baldness.

Myth: When you lose more than X number of hairs a day, it means you’re losing your hair

Hair exists in growth cycles; most people will shed between 40-120 hairs a day. This is due by many factors, such as health, hair condition and so forth. This is perfectly normal and not a form of hair loss. Hair loss is not only due hair falling out.  It is due to individual hair shafts become thinner, and eventually stop growing altogether.

Can Hair styling products, hair dyes, and washing your hair too often can cause baldness

This isn’t true.  Whilst styling products and hair dyes can damage the condition of the hair (heat styling and peroxide, for example), they can’t damage the hair follicle itself.

Myth: Baldness shows you have more testosterone than someone with hair

Not true. When the male sex hormone testosterone is converted into DHT, that can trigger male pattern baldness in those who are predisposed to it. The testosterone levels themselves however, have no bearing on this. So bald men aren’t necessarily more ‘manly’ in a hormonal sense, than those with hair.

Most young men will eventually develop a ‘mature hairline’.  Men and women’s hairlines are often different.  Women will often keep their juvenile hairline, the one they had in childhood.  Men on the other hand (though not all), will see their hairline change between the ages of 17 to 29.  Whilst it rises slightly, it’s not the same as a receding hairline, and doesn’t mean a person is going bald. It’s simply a sign of aging.  Some men will maintain their mature hairline and a full head of hair for the rest of their lives.

There are many spurious hair loss treatments on the market that claim to be able to reverse hair loss in men.  Whether they’re ‘laser combs’, herbal pills or shampoos – most of them are not worth spending your money on.

A hair transplant may be an option for those with significant hair loss. Two effective FDA approved medications that can help those suffering minor to moderate hair loss include propecia (known as finasteride in its generic form) and minoxidil.

Whilst propecia can cause negative side effects in a very small percentage of men (such as loss of libido), it’s regarded as one of the most effective prescription treatments available. Propecia halts the production of DHT – the hormone responsible for miniaturizing and eventually destroying hair. When taken at a dose of 1mg daily over time it can rejuvenate the hair follicles, thus re-growing hair.

Whilst no significant evidence suggests that propecia is an effective treatment for re-growing hair at the hairline (though it can slow further loss), it’s effectiveness for the crown and middle areas of the head are well documented. Propecia isn’t a definitive ‘cure’, but it can certainly reverse some of the effects of MPB and significantly slow down or halt any future hair loss.

Whilst propecia comes in a the form of a pill, minoxidil usually comes in a topical solution which is spread over the scalp. Whilst more effective for men that have been suffering hair loss for 5 years or less, it has proven to have positive results – especially when used in conjunction with propecia.

Hypothesis’ suggest that the ingredients contained within the formula are beneficial to both blood flow and the health of the hair follicle.

Look to the future

With stem cell research showing promising results when it comes to treating hair loss, more effective treatments are certainly on the horizon. Hair loss effects the self-esteem of more men than care to admit it, but for each of them there is far more hope for the future now, than ever before.

This is a guest post by Nutritionist, Lisa Sanderson